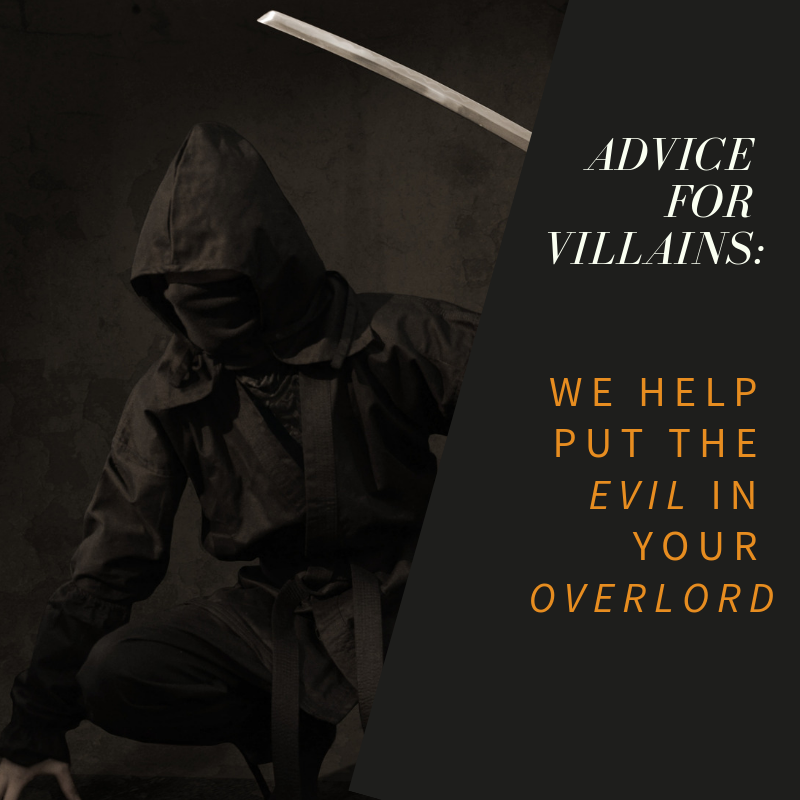 Hello, and welcome to the first-ever installment of our brand-new Evil Overlord advice column, brought to you by a coalition of super-villains who prefer to remain nameless… for now.

Today we’re featuring an up-and-coming sorceress-turned-conquerer with a goddess complex – so much so that she’s even willing to share her name, despite the risk of lessening the mystery of her evil persona by publicly divulging her secrets.  In her own words, “Their world is already crumbling under the force of my power, and they cannot stop what’s coming!  What harm could it do to revel in my brilliance?”

How’s that for a pillar of villainous confidence?  We applaud her, and you should, too – or she may send her minions to obliterate your village.

Take it away, Ardis.

I’m here for one reason and one reason only… to put to rest this ridiculous notion that an ordinary mortal can overcome villainous majesty simply because he or she was prophesied to do it.

Do you know what a prophecy really is?  It’s a warning, yes, but not for the heroes – for us.  Why else would the universe, seers, or whoever delivers the prophecies in your realm give such exacting, explicit descriptions of exactly how we villains are doomed to fall?  Clearly, if a villain’s defeat was foretold and inevitable, the hero would need no guide to achieve it.

This is the secret, the key to unlocking unlimited, victorious domination — the guide, the prophecies, are for us.   They exist to make sure we are not conquered.  That we succeed.  That we flourish.  That we conquer, as we were meant to do.

Have any of you destroyed a prophesied hero, sending him to a gruesome death when he was predicted to bring your demise?

I have.  So heed my words.  You can vanquish those pesky prophetic heroes… and I can tell you how.

How to Destroy a Pesky Prophetic Hero

Step One:  Learn the Prophecy

How can you undo a fated plan for your demise if you don’t even know what it is?  Get the prophecy – that is priority number one… no matter what it costs.

It’s best if you make him think he’s on your side, but at the very least, make him doubt his own motives… and preferably his sanity.

Don’t rely on a hero to take himself down just because you manipulated him.   You need to infiltrate his life so deeply that he never sees it coming, preferably from multiple directions at once.  Make him think he’s beating you when he’s playing straight into your hands.  It’s a classic move, but a solid one.

Word of warning:  be patient.  Evil conspiracies take time to plan and implement, and trying to rush this step is a sure-fire way to end up on the wrong end of that prophecy you’ve been trying to thwart.

You know what can’t be prophesied?  Movements so insanely erratic that even you don’t know what’s coming.  But be careful… sometimes impulsivity is the exact thing that fulfills the prophecy.  Even evil villains need self-control.

By this point I’m assuming you’ve activated your brilliant master plan and your hero is dead.  Good work, but don’t get sloppy.  Many prophesied heroes come with a resurrection clause.  Read the fine print… and don’t leave anything to chance.

Step Six:  When All Else Fails…

Destroy that world/kingdom/realm/dimension in a glorious blaze of death and darkness, and move on to a new one.   No one ever said you had to get right on the first try!

And remember, super-villains… no monologuing. Ever.  Not even to your most-trusted allies.  I know it’s hard not to flaunt your brilliance, but no one needs to know your full plan.  Where’s the ominous mystery in that?

Besides, your trusted confidant is probably the very one who’s going to betray you, so it’s best not to trust anyone, right?

You can find out more about Arameth (and the heroes Ardis is trying to destroy!) in The Lex Chronicles trilogy by Crystal Crawford, the debut series in the Legends of Arameth world.  Also check out previous posts here on my blog for more about this story and its world… there are some fun things posted this month.  And be sure to Follow me on Facebook and subscribe to my newsletter for more info and updates — and free content!

Thanks for reading!  Did you enjoy this post?  Leave me a comment below and let me know what you think!

This post is part of a Blog Tour series for February is Fantasy Month!

You can check out the full blog tour line-up here: http://jenelleschmidt.com/fantasy-month-tour-schedule/

And don’t forget to enter the Giveaway!

Thanks for joining us!  I hope you have fun!!!

5 thoughts on “How to Destroy a Pesky Prophetic Hero”