I also had a REALLY intense, stress-laden, less-than-a-minute-til-the-deadline-and-I’m-still-not-done month of November.  I ended up exceeding the word count, but as you can see in the graph below, I really had to push the last few days to get up to the 50k minimum. 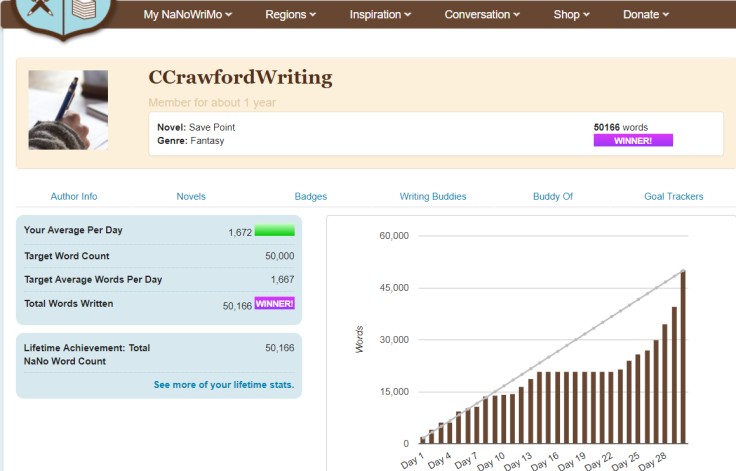 I just thought I’d share a brief bullet-point list of some of the things I learned from my frenzied first-time NaNoWriMo experience in the hopes that it helps some of you prepare for what’s to come.

The majority of my stress during NaNoWriMo came from my failure to do this one simple thing.  I had planned to create a loose outline of my novel before beginning, but I was busy in the weeks leading up to November, time got away from me, and before I knew it, it was November 1st and I had to jump in writing without much preparation.   This hurt me in the end, as I had to pause writing partway through November to figure out what in the world I was doing, because I was hitting major blocks in trying to get my word count in each day since I had no idea where the story was going.  Prepare ahead of time, and you’ll thank yourself halfway through November.

And stick to them.

NaNoWriMo recommends that you aim for 1,667 words per day.   Why?  Because this is the minimum you need to write each day in order to reach your 50k target by the end of November.  Could you skip a day and then write double the next day?  Sure.  But do that more than a day or two and suddenly you’re staring down the barrel at a void of about 11,000 words and only four hours to write them in.   … Not that I’ve ever done that… *ahem*

3. Motivate yourself any way possible

Have an extra cup of coffee (or four).  Go for a jog to clear your head.  Turn on the theme song to Rocky.  Eat a whole pie.  Or no pie.  Eat carrots for a whole week and promise yourself pie when you hit your word count.  Whatever it takes, do it, because you have only a month to write 50,000 words.  So, yeah.

One thing that helped me was an app called Write or Die.  It’s pretty much what it sounds like.  You set your time and word count goals, and it calculates a pace at which you need to type in order to meet that, then punishes you in a variety of ways any time you pause too long between typing.  Punishments vary from unpleasant noises to flashing red lights to (if you choose this setting) deleting part of what you’ve typed so far.   Stressful? Yes.  Effective? Yes.   Let’s face it… if you’re desperate enough to use an app called Write or Die, you’ll probably decide the stress is worth the benefit.   It worked for me.

Not if you hit a block.  Not if you think your novel isn’t any good.  Not even if you are less than an hour from the deadline and still have over 1,000 words to write.  DO NOT GIVE UP.   I hit all of these problems and still completed my novel within the deadline, and even had 166 words over the limit. (I even submitted it with like 20 seconds to spare!)   But the truth is that even if you don’t finish in time, you will still have way more progress toward your novel than you had before you started.  That’s really the point, right?

NaNoWriMo can be stressful, but it is also very rewarding.  Not only do you get a cool little badge thingy and a certificate if you win, you also get the satisfaction of knowing YOU WROTE A NOVEL.   And even if it’s a sloppy, rambling, needs-a-million-hours-of-editing novel like mine ended up being, it’s a novel you didn’t have written before NaNoWriMo.  You wrote a  novel!

And that’s something to be proud of.